These are the first titles published by North Bridge, a company started in 2013 by Anton Rippon and Graham Hales, two former-directors of Breedon Books. When at Breedon, they gained an unequalled reputation in the publishing world for producing outstanding titles such as Derby County The Complete Record, The Derby County Story, Images of Derby, Haunted Derbyshire and Derby: An Illustrated History. 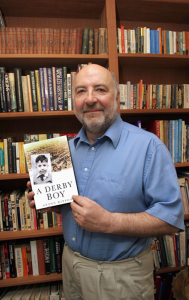 Anton Rippon was born in Derby. He has spent almost all his working life in the newspaper and publishing industry. He is the author of around 30 sports books, several of them on Derby County, and also of an autobiographical memoir, A Derby Boy, published in 2007. His work has appeared in a wide range of national newspapers and magazines and he wrote the 1984 BBC Radio Derby series on the history of the Rams, for which he interviewed many of the players who had served the club over the previous 70 years. In 1982, he founded Breedon Books, the sports and history publisher that he sold in 2003 to resume writing full-time. He writes two weekly columns in the Derby Telegraph. In 1993, the Derby County Former Professional Players’ Association elected him an honorary member. He is also a member of the Sports Journalists’ Association, the International Society of Olympic Historians and the Football Writers’ Association.