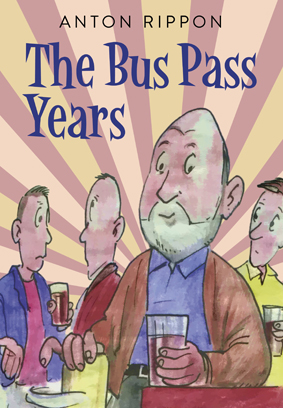 ACCORDING to the Derby Telegraph, Anton Rippon is “the city’s favourite writer”. For the past 15 years he has introduced readers to a host of characters as he puzzles over self-service checkouts, press-button helplines and the near impossibility of finding a live human being to help him. Author of the best-selling A Derby Boy, an autobiographical memoir of growing up in the town after the Second World War, Anton has now produced The Bus Pass Years, based on his weekly newspaper column. They are all here – the shadowy Man at The Bar; Alf, who does all his clothes shopping at Age UK; and the Friday lunchtime crowd at the White Swan where, each week, the world is put to rights, along with regular trips down Memory Lane. The Bus Pass Years will delight anyone who enjoyed the 20th century but who is still trying to make sense of the 21st.

A funeral and a mobile phone
IT was Wilfred Pickles, in his wireless show Have A Go, who asked contestants: “Have you had any embarrassing moments?” A query guaranteed to get the audience beside themselves with mirth, even before the answer was forthcoming.

Many seemed to have occurred at funerals, not least when mobile phones went off during services. I can still vividly recall the panic that gripped me when, during a long Roman Catholic funeral service for the mother of a good friend, I was suddenly convinced that I hadn’t turned off my mobile.

What to do? Well, I elected to check. As it turned out, I had switched it off, but I’ll never forget the look of horror on the face of a woman two seats away whose expression said: “My God, he’s not going to make a phone call now, is he?” She nudged her husband who looked across just in time to see me putting the phone back in my pocket. They were now both convinced that I had been spotted and had abandoned attempts to text my bookmaker during the eulogy. I tried to catch up with them outside the church, to explain, but they saw me coming and hurried away.

It seems that a lot of embarrassing moments have happened around death and memorial. My pal, Ted Harrison, recalled the time he attended a meeting of the old Derby and District Welfare Football League, in a room over a pub. An official’s wife had recently died and, before the meeting began, the chairman called for a minute’s silence.

It had been under way for about five seconds when there was the heavy clump of footsteps coming up the wooden stairs. A latecomer was on his way, oblivious to what was happening. He burst through the door, pint of bitter gripped tightly in one hand, and was halfway through: “Evening all, sorry I’m late,” before he realised what was happening.

By now, Ted was consumed by a fit of the giggles. He tried to stifle them by taking a drink, but that only resulted in beer coming down his nose. He was saved by the chairman’s gavel signalling the end of the longest 60 seconds of several people’s lives.

Talking of football meetings, Frank Nix, my old sparring partner (we were once each fined ten shillings by the Derbyshire FA after a fracas on the pitch) wrote an interesting piece for the Derby Telegraph about life in the Castleward area. He mentioned the inaugural meeting of the Derby Sunday League at what was then the Exchange Hotel, next to where the Derby Evening Telegraph had its offices.

I wonder if Frank remembers the club secretary who, having been constantly thwarted in his efforts to second several motions – and thus have his name recorded in the minutes of an historic meeting – eventually cried out in exasperation: “Well, I’ll third it then!” Was he embarrassed? I don’t know. Wilfred Pickles never asked him.