Click the Add to Cart button to buy these books using Paypal or with your Credit Card (Visa, Mastercard, Discover, American Express), then view your completed Shopping Basket in the next tab. This does not commit you to purchase, you can decide to cancel, change the quantities or delete items from your basket at any stage. Even after you press the yellow Paypal button there is no commitment. All our books are now post free from this website, except for overseas orders. If you do not wish to purchase by Paypal or credit card, you can always pay by cheque or postal order, or visit us with the cash amount. Cheques and Postal Orders should be made out to North Bridge Publishing. Please send appropriate money for each title. And don’t forget to include your own details and which book it is you require. Send to: North Bridge Publishing, 20 Chain Lane, Mickleover, Derby, DE3 9AJ. Or telephone: 07769 685627, email: sales@northbridgepublishing.co.uk.

As the Rams legend Alan Hinton says in his foreword to Clough, Maxwell & Me, Stuart’s tales from those days are shocking, humorous and enlightening. His stories about, not just Clough and Maxwell but also Dave Mackay, Arthur Cox, Jim Smith, Lionel Pickering and others, will have you roaring with laughter, and shaking your head in disbelief. You will discover whole new sides to men you thought you knew so well.

Tells the tale in vivid detail. The highs and the lows, the characters, the matches, the controversies – and there have been plenty of them – are all here, set against a backdrop of the town and city that has cheered the Rams all the way from the County Ground and the Baseball Ground to Pride Park.
Published September 2013. 160 pages, text only; there are no pictures, 234 x 156mm.
£10.99 post free (postage is free for UK ONLY)

THERE have been many memorable matches in Derby County’s long history. Now Rams historian and Derby Telegraph columnist Anton Rippon has put together his choice of 50 games covering a period from the days of Steve Bloomer to those of Dave Mackay.
From Bloomer’s return to a hero’s welcome, to Mackay’s team that won a second League title, the book provides a fascinating retrospective.
Published September 2015. 132 pages, text and pictures, 234 x 156mm.
£9.99 post free (postage is free for UK ONLY)

The Day That Derby Won The Cup

On 27 April 1946, Derby County won the FA Cup. It was the first Cup Final since the end of the Second World War, the Rams’ first appearance at the Empire Stadium, and the first time in their 62-year history that they had lifted the trophy. Through interviews with the Cup-winning team, the newspapers of the day, including match reports on every cup-tie on the road to Wembley, and fascinating photographs, The Day That Derby Won The Cup tells the dramatic story of that epic season.
Published March 2014. 144 pages, both text and pictures, 234 x 156mm.
£10.99 post free (postage is free for UK ONLY)

When The Rams Met The Nazis

In May 1934, Derby County, one of England’s leading clubs, was invited to make a close-season visit to Germany. They found a country swathed in the swastika. Adolf Hitler had gained power only 12 months earlier, and even football could not escape the Nazi thrall. The Derby players were also surprised by the strength of their opposition as the Germans used the Rams’ visit to prepare for the World Cup to be held in Italy later that month. This tells the story of that trip, using contemporary reports and photographs many of which have not been published before. The result is a fascinating glimpse into the experience of English footballers stepping into a country undergoing the massive political and social upheaval that would ultimately lead to the Second World War.
Published March 2014. 132 pages, both text and pictures, 156 x 234mm. Landscape.
£10.99 post free (postage is free for UK ONLY)

ANTON RIPPON is a Derby boy through and through. He was born in an end-of-terrace house there just before Christmas 1944, his appearance hastened after his mother fell over a milk churn in the blackout and then accepted a lift on a neighbour’s ancient motor-bike. As the baby struggled into wartime Britain, just down the road a Derby Corporation bus driver was recapturing an escaped German prisoner-of-war. Despite that dramatic entrance into Derby life, Anton survived to become one of the city’s best known writers and personalities with a string of books to his name and a popular weekly column in the Derby Telegraph, the newspaper calling him “the city’s favourite writer”. Anton returned to his roots with A Derby Boy, his evocative account of growing up in the town in the post-war years, and of the rites of passage of a young man in 1960s Derby. Nostalgia abounds with tales of family, schooldays, trips to theatres and cinemas, shops and streets, pubs and clubs, sporting life and national events, all memories recalled with great humour and sure to strike a chord with generations of Derbeians. First published in 2007 and now enlarged and updated, this tale of mad butchers and dodgy coalmen, eccentric schoolteachers and strange publicans, illegal gambling and irate undertakers combines with his family’s often tragic story to open up a new perspective of life in Derby over four generations.

ACCORDING to the Derby Telegraph, Anton Rippon is “the city’s favourite writer”. For the past 15 years he has introduced readers to a host of characters as he puzzles over self-service checkouts, press-button helplines and the near impossibility of finding a live human being to help him. Author of the best-selling A Derby Boy, an autobiographical memoir of growing up in the town after the Second World War, Anton has now produced The Bus Pass Years, based on his weekly newspaper column. They are all here – the shadowy Man at The Bar; Alf, who does all his clothes shopping at Age UK; and the Friday lunchtime crowd at the White Swan where, each week, the world is put to rights, along with regular trips down Memory Lane. The Bus Pass Years will delight anyone who enjoyed the 20th century but who is still trying to make sense of the 21st.
Published August 2016. 100 pages, text only, 246 x 171.
£8.99 post free (postage is free for UK ONLY)

It Happened in Mickleover

IN the course of 200 years, Mickleover moved from sleepy rural village to vibrant city suburb. In the course of that journey there were many fascinating, strange, mysterious, even downright bizarre events. It Happened In Mickleover has trawled back over two centuries of local newspapers to discover just what was going on here in the years between the 1750s and the 1960s. Read about: The Mickleover tramp menace; The bomb outrage at Mickleover Manor; The body in the trunk; Mickleover at war; Mickleover’s very own VC; The election meeting that ended in a brawl; The daring highway robbery by a local pub landlord. All this and much, much more makes It Happened In Mickleover such a fascinating book.
Published April 2014. 152 pages, both text and pictures, 234 x 156mm.
£8.99 post free (postage is free for UK ONLY)

Over the past 40 years, journalist and writer Anton Rippon has interviewed hundreds of people from Derby. Young and old, from a wide variety of backgrounds, well-known and everyday, their stories add up to a unique archive – a wonderful picture in words of Anton’s hometown through the 20th century. He talks about some of the people he met, and relates their memories of childhood and early adulthood, of school, shopping, work and play, all intertwined with his own whimsical reminiscences of making his way from childhood to adulthood in the town that people are pleased to call their home.
Published September 2013. 160 pages, both text and pictures, 234 x 156mm.
£10.99 post free (postage is free for UK ONLY)

Derby: The Thirties and the War Years

THERE can have been few more significant times for Derby than the 1930s and the war years. Through events great and small, many of them reported in the Derby Evening Telegraph – this fascinating book paints a picture of what it was like to live in the town between 1930 and 1945. There was a never a time like it before, and there has never been a time like it since. Read about Derby awash in the great flood, Trolley buses instead of trams, The bus conductor who saved an aircraft pilot, Councillors’ “luxuries” called to account, Royal celebrations, The day war broke out, Derby under the Blitz, Wartime Christmas, The Rams at war, Victory celebrations.
Published October 2014. 136 pages, text and pictures, 234 x 156mm.
£9.99 post free (postage is free for UK ONLY)

Derby: The Fifties and Sixties

FOR the people of Derby the start of the 1950s brought the first signs that life since the end of the Second World War was beginning to ease. Food and petrol were still rationed and life was still comparatively austere but, little by little, times were changing. By the end of that decade the austere Fifties were no more – the Swinging Sixties were getting under way. Through events great and small – many of them reported in the Derby Evening Telegraph – this fascinating book paints a picture of what it was like to live in the town between 1950 and 1969. Read about: Curtain down for the Grand Theatre, How Derby celebrated the Coronation, The Carriage and Wagon Works fires, The great Derby earthquake, Derby Playhouse destroyed by fire, Assembly Rooms demolished, St Alkmund’s Churchyard razed to the ground, “More Derby drunks than ever before”, Foul play at the dog track?, A sweltering summer … and the worst of all winters.
Published October 2014. 132 pages, text and pictures, 234 x 156mm.
£9.99 post free (postage is free for UK ONLY)

Derby: The Seventies and Eighties

FOR the people of Derby the 1970s started with promises that their town would be transformed. By the end of the decade, much had still to be done to bring that to fruition. But the town was now a city, Derby County had twice become champions of England, and Derbeians had overcome one of the most devastating blows ever to strike an industrial centre. Through events great and small – many of them reported in the Derby Evening Telegraph – this fascinating book paints a picture of what it was like to live in Derby between 1970 and 1989.
Published September 2015. 132 pages, text and pictures, 234 x 156mm.
£9.99 post free (postage is free for UK ONLY)

Also available from J. H. Poynton’s in Derby’s Market Hall, Derby County club shop and website at Pride Park (Derby County books only), Amazon.co.uk, Mickleover Golf Club. The It Happened In Mickleover title can be found at Parade Post Office, The Community Centre and Devonshire Drive Post Office (all outlets are in Mickleover).

For additional postage that is required to EVERY order from abroad, please also choose whichever button below applies. It will show the cost when you view your SHOPPING BASKET. If you are not certain please do contact us. All our books are also available via Amazon and their shipping prices, which we have no control over, are cheaper. It is definitely worth a visit to their site. 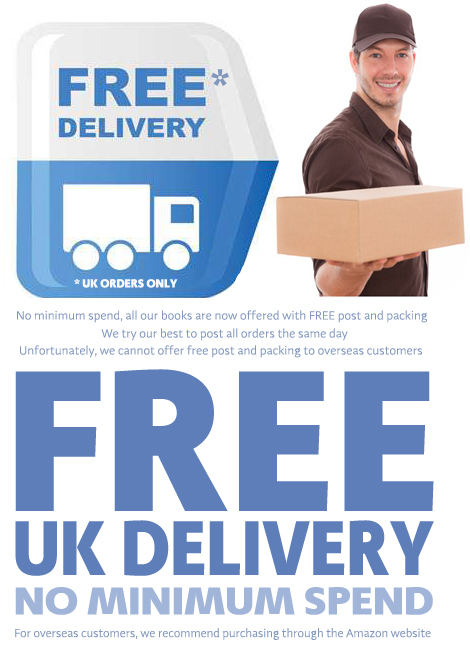