↓ Skip to Main Content
Home › Derby County: The Story of a Football Club

Derby County: The Story of a Football Club 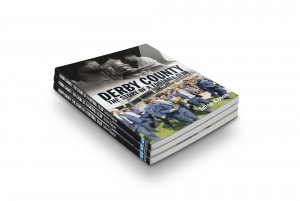 FROM the gaslit days of Queen Victoria to the multi-media world of the 21st century, the story of Derby County is a fascinating one. Formed by a cricket club, founder members of the world’s first Football League, FA Cup winners, champions of England – the Rams have long been one of the game’s greatest names. Derby County – The Story of a Football Club tells the tale in vivid detail. The highs and the lows, the characters, the matches, the controversies – and there have been plenty of them – are all here, set against a backdrop of the town and city that has cheered the Rams all the way from the County Ground and the Baseball Ground to Pride Park. 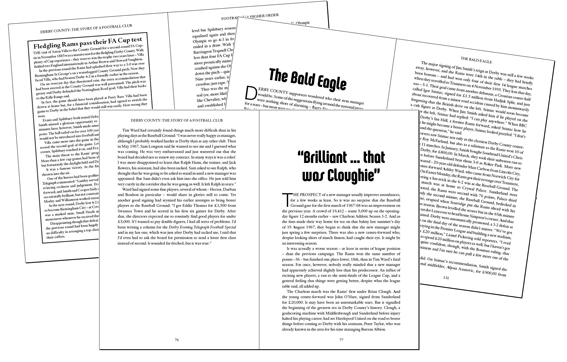 He admitted it. In fact, he had been steadily siphoning off money for 10 years, and not just from the cricket club but from the football club, too. With his wife and several of his six daughters – and £1,000 of the club’s money – Richardson fled to Spain, opened a tailor’s shop (he’d run a similar business at 40 Babington Lane), obtained the patronage of King Alfonso, and lived to the ripe old age of 93.

Derby County were to have their hands full with Archie Goodall. He was up before the magistrates for punching a spectator who had barracked him. On one occasion he walked off the pitch after 90 minutes of an end-of-season United Counties League championship decider against West Brom. Extra-time was to be played but Archie claimed that his season’s contract had ended. If Derby wanted him for another 30 minutes then they would have to pay him extra. They refused and carried on with 10 men. He also left them with 10 men for a league game at Preston, at the last minute refusing to travel because his wife was ill.

Twelve months later, the Rams were back at the Crystal Palace. Their league season had already been a remarkable one. On a bog of a Baseball Ground pitch the Rams beat Sheffield Wednesday 9-0 (Bloomer scored six) and the following week hammered Wolves 6-2. There was a 7-1 defeat at Aston Villa, and a 5-5 draw with Everton at the Baseball Ground where Derby had trailed 5-2 with only 15 minutes to go.

Desperately homesick, each Saturday night he caught the first available train back to his South Derbyshire home. Despite his status as an England regular, he cut a sad figure and met a sad end. Certified insane, he was committed to Derbyshire Lunatic Asylum and died in November 1917, aged only 38.

However, on 17 February 1919 the mayor of Derby, Alderman William Blews Robotham, chaired a public meeting at the Guildhall “to save Derby County FC from the very real threat of extinction”. The club owed its bank £1,300 and, according to Rams director Bendle Moore, the board would not carry on unless public money was raised, otherwise Derby County would have to “sell their players to meet their liabilities and the pass out”.

With Gallacher in the side, the Rams now had eight internationals – Cooper, Barker, Bowers, Keen and Crooks (England), Duncan and Gallacher (Scotland) and Sid Reid, a reserve-ream full-back who had been capped by Ireland.

Derby County now had a different manager from the one with which they had started the Cup campaign. In August 1941 a joint FA-Football League commission had finally got to the bottom of how, throughout George Jobey’s time as manager, the Rams could tempt top players to the Baseball Ground. Some inventive accounting had seen the maximum wage structure regularly broken and illegal bonuses paid. Jobey was permanently suspended from football.

In May 1962, Harry Storer handed in his resignation. Storer was 64. He had been in management for 31 years. “A younger man is needed,” he said, “one who is able to deal with the worries, frustrations and hard work that are part and parcel of a football manager’s life.” Worries, frustrations and hard work or not, there were 52 men who wanted his job. His successor was not among them, however. Tim Ward, a stylish wing-half for the Rams in the post-war years, did not apply. He was still reflecting on the fact that he had just guided Grimsby Town to promotion from the Third Division. But he was the man that Derby County wanted. Chairman Fred Walters approached Ward, who was not bound by a contract with Grimsby, and he accepted. “I always loved Derby,” he said. So he took the job for £2,500 a year and Vauxhall Victor car.

Ward had signed some fine players, several of whom – Hector, Durban and Boulton in particular – would share in glories still to come. Yet another good signing had stymied his earlier attempts to bring better players to the Baseball Ground: “I got Eddie Thomas for £3,500 from Swansea Town and he scored in his first six games for Derby. After that, the directors expected me to routinely find good players for under £5,000.

In the close season came the news that Clough had made the audacious signing of Dave Mackay from Tottenham. A football legend would lead the Rams. Yet the season began disappointingly. By 24 August, the Rams had played four league games and failed to win any of them. Then Clough signed Sheffield United’s little midfield dynamo, Willie Carlin, for a club record £60,000 fee. Derby lost only three more league games.

The goalless draw put the Rams out. There were more dark mutterings, including a rumour that someone had approached the Portu­guese referee, Francisco Marques Lobo, and offered him a bribe to help Juventus win. In fact, a notorious fixer, allegedly on behalf of the Juventus club, had indeed contacted Lobo. The referee was offered a car, $5,000, and the promise that Dr Artemio Franchi, president of both Juventus and the Italian Football Federation, would “promote his career” as an international referee. But the honourable Lobo had refused and immediately reported the matter to UEFA who, after hearing the evidence, decided to let him officiate at the Baseball Ground. No action was taken against Juventus or Franchi because no connection between them and the shady fixer could be proved. Franchi was soon to become president of UEFA. Interestingly, the Derby-Juventus game was the last European match that Lobo would ever referee.

The Rams reached their first semi-final since 1948. Their opponents were the same as that last hurdle of 28 years earlier, Manchester United, whose manager, Tommy Doch­erty, called it “the real Cup Final”, adding: “What can you call the other semi-final between Crystal Palace and Southampton? It’s a joke.”

March 1984 was the most critical month in Derby County’s history. The Rams were without a win in 10 league games and a crucial High Court date was fixed for 12 March, two days after the sixth-round tie against Third Division Plymouth Argyle at Home Park. The Inland Revenue was owed PAYE sums of £131,948, and the Customs and Excise unpaid VAT of £78,123. Derby City Council and Derbyshire County Council had stayed clear of making any major cash injection, so the club needed a major backer from industry or commerce. Three new directors brought in some money and existing directors dipped into their pockets. Stuart Webb bought 27,000 shares (around 60 per cent) at a cost of £140,000, in order to offer a substantial enough package to a potential saviour from outside the club. Rumours of a multinational company based in Hong Kong came to nothing and on 1 March, Webb entered into negotiations with the millionaire publisher, Robert Maxwell, chairman of Oxford United.

There had been little response to the “for sale” sign at Derby County. An offer by local newspaper millionaire Lionel Pickering was rejected. Pickering had tired of waiting for an answer and went public. He was then told that he was no longer welcome at the Baseball Ground. Rams supporters turned on Maxwell who claimed that the local media incited the fans, and BBC Radio Derby commentator Graham Richards was barred from the Baseball Ground.

Supporters wondered who their next manager would be. Some of the suggestions flying around the national press were nothing short of alarming – Barry Fry and Osvaldo Ardiles for a start – but most were predictable. Twice the Derby board interviewed Brian Horton, recently sacked by Manchester City where Francis Lee had taken over as chairman. Eventually they appointed Jim Smith – “the “Bald Eagle” – an ordinary player who had proved to be an extraordinarily good manager.

Instead Derby County were forced into temporary receivership. Pickering was removed from the board and, seemingly out of nowhere, a new board appeared, comprising barrister and deputy coroner for North Yorkshire, John Sleightholme, marketing consultant Steve Harding, and Jeremy Keith who described himself as a “business strategist”. They were the public face of a consortium that had apparently come up with £15 million to restructure loans from the Co-operative Bank, which was now owed £26 million.

Jewell’s 16th game as Derby County manager was on 23 February 2008 against his former club, Wigan. A 2–0 defeat set a Derby club record of 21 league games without victory. On 29 March a 2-2 draw with Fulham confirmed the Rams’ relegation as the first club in Premier League history to be doomed before the beginning of April. Derby County went into the record books for a number of other reasons, too. They won only one game all season – that under Jewell’s predecessor – which meant that they shared a 108-year-old record with Loughborough FC. And they finished with only 11 points, an all-time low. The last three home matches heaped humiliation upon misery: lost 6-0 to Aston Villa, 6-2 to Arsenal, and 4-0 to Reading.

Nigel Clough said that the squad contained “too many players”, and as the season concluded he began to trim it, with 17 players ultimately leaving Pride Park. One already brought back into the fold, however, was Robbie Savage, exiled by Jewell to Brighton on loan. Clough not only made Savage first choice in the Rams’ central midfield, but also organised an extension to the player’s contract. Football supporters need a pantomime villain, and Savage had fitted the role perfectly. But now he was a Pride Park favourite. It was a canny – and sensible – piece of self-reinvention.

…and Stephen Bywater who had upset his Derbyshire neighbours with an “art installation” – a decorated portable toilet and horse box complete with two inflatable sex toys – in his garden but visible from the street. A tarpaulin was used to good effect and the goalkeeper apologised for any offence caused.

PLEASE NOTE: THIS IS A TEXT ONLY BOOK, THESE IMAGES DO NOT APPEAR IN THIS PUBLICATION. They are just to illustrate the many stories in this fantastic book