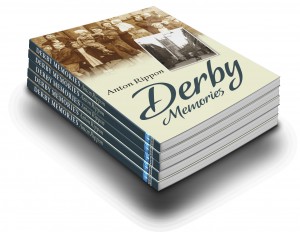 OVER the past 40 years, journalist and writer Anton Rippon has interviewed hundreds of people from Derby. Young and old, from a wide variety of backgrounds, well-known and everyday, their stories add up to a unique archive – a wonderful picture in words of Anton’s hometown through the 20th century. In Derby Memories, he talks about some of the people he met, and relates their memories of childhood and early adulthood, of school, shopping, work and play, all intertwined with his own whimsical reminiscences of making his way from childhood to adulthood in the town that people are pleased to call their home. 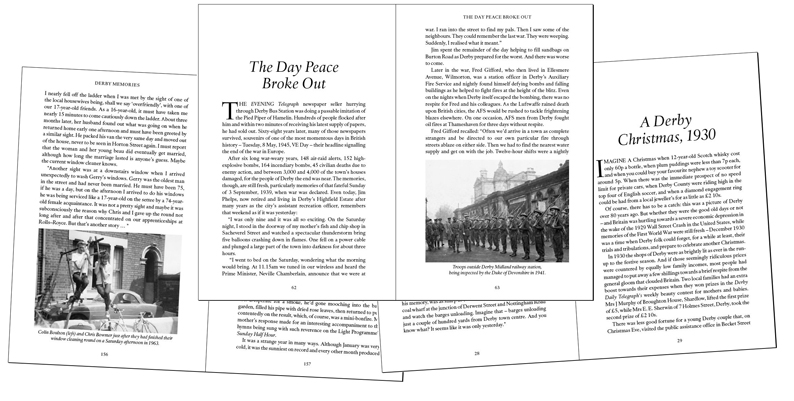 Everyone knew the Walleys, not least because there were so many of them. Jenny Walley (now Jenny Jukes) recalled those days: “I’m the youngest of 14 children – sadly, there are only 10 us now – and I think we were possibly one of the largest families in Derby then. I grew up in a terraced house in Rosengrave Street, off Gerard Street. It was a bit like Coronation Street. Everyone knew everyone. And everybody helped each other out when needed, even to laying out the dead. They did everything for each other.

As a young lad I saw most of the shows there – pantomimes, variety shows, operas, once a circus, and even a West End play that was there on tour. With the coming of television, theatre generally went into decline and in order to put bums on seats, they started putting on nude shows at the Hippodrome. “Girlie Revues” they called them. Now the trouble was that the Lord Chamberlain, guardian of the country’s moral sensibilities at that time, had decreed that the girls were not allowed to move. They had to pose in a static position. Indeed it was thought that the sight of a naked and gently swaying female bosom would be far too arousing for English audiences in those innocent 1950s.”

David landed a small role in the police TV drama series Z Cars, quickly followed by his first regular role, in one of the classic drama series of the early 1970s, A Family At War. David’s youthful appearance, yet mature demeanour, was perfect for the role of Robert Ashton, the 16-year-old naval volunteer trying to assume a man’s role while still a boy. In 1981 came Hitchhiker’s Guide to the Galaxy. “But remember,” said David, “it all started above that newsagent’s shop. It was in Derby that the seeds were sown.”

“On Osmaston Road itself there were quite a few large houses occupied by surgeons and senior consultants at the DRI. From Reginald Street to Grange Street there were five large detached houses, each standing in its own grounds. Well back from the road, the middle one was where Mr H. H. Bemrose, of Bemrose’s printers, lived. On the opposite side was Derby High School for Girls. On the top corner of Bateman Street was the surgery of Alderman Dr Robert Laurie, who was a mayor of Derby. Dr Laurie was highly respected. In dry weather he used to do his rounds in an open-topped carriage pulled by a horse.”

“It sounds odd, but the war was a very happy time because we were all in it together. Mum had five brothers and every time I went out, I met a relative, so I was never scared or alone. A bomb dropped on Bliss’s in City Road, and one fell on the railway bridge near Parker Foundry. Dad had always refused to go to the shelter, claiming he’d sleep through any air-raid. But he got up that night.”

Men on night shift at the Carriage and Wagon Works heard of the surrender and decided to leave work for “a couple of hours of jollification”. When official sanction was denied them, they simply dragged the canteen piano into one of the sheds and began a singsong that lasted until dawn. And a truckload of black American troops made merry by “careering around the town centre shouting and singing”.

The following season, the Derby Boys team was kept together to play in the Derby Welfare League. Strengthened by players like Jack Parry, who went on to play for the Rams, Tony Grogan and “Ginger” Clarke, they won Section D of the league with a remarkable record: played 19, won 18, goal scored 215, goals against 9. In one game, against Derby West End on Osmaston Park, Derby School Old Boys won 30-0.

In Derby there were nearly 250 street parties. The Town Council had allocated 12 guineas (£12.60) as prizes to be awarded to the three best-decorated streets in the borough. The residents of Grey Street, off Gerard Street, won first prize. Tubs containing masses of flowers were set at regular intervals on the pavements down either side of the street, every window sill had a window box filled with red, white and blue flowers, and at the bottom of the street, a large board proclaimed: “God Save The Queen,” while naval signal flags spelled out the same message. The mayoress received a bouquet from five-year-old Valerie Wood, whose parents had organised the decorations and who themselves were presented with a “hall set” by grateful neighbours. Tewkesbury Street and Gisborne Street tied for second place, and there were commendations for Winchester Crescent, Colombo Street, Norman Street, Birdwood Street, Harcourt Street, St Luke’s Street, York Street, Bath Street, Albion Street, Canal Street and Nelson Street.

Perhaps the most telling comparison was that, half a century ago, a cigarette smoker would pay the equivalent of less than 7p for 10 Park Drive. And, of course, almost every one lit up. Every bus, pub, shop, cinema, and just about every home, was a fog of cigarette smoke. For sports fans that Christmas, while Frank Tyson was bowling England to a 38-run win over Australia in the Second Test at Sydney, Derby County were plummeting into the Third Division North for the first time in their history.

“We were the fourth oldest company in the entire country and it was more than just a practical blow when we went under,” William said. “Losing a family company, which had such a long and distinguished history, was hard to take, especially since it was caused by a production problem which should have been avoided. It was a very emotional time all round, however, because my father had died the previous year, and my mother died the following year. It was William’s father who began the family’s cricketing tradition. Arthur Walker Richardson, who was born in Quarndon, was 29 when in 1936, as an amateur, he skippered Derbyshire to the only County Championship title in the club’s history. In the early 1990s, William’s son, Alastair, carried on the family tradition by appearing in two first-class matches for Derbyshire.

“I did a paper round for which I received 10s for six days – my first independence with my own money. I loved meeting the different people, mainly the elderly men – not much older than me now – waiting on their doorsteps. They asked for the latest cricket scores from the stop press, or the half-time scores from the football. The Perrys owned the newsagent’s, but the business was rundown because they spent no money on the shop. Us delivery boys had bags that were all patched-up because Mr Perry wouldn’t buy new ones. Being on Osmaston Road, they enjoyed sales of papers as the workers came out of the main gates of the Carriage and Wagon Works, and Rolls-Royce. They also enjoyed good sales at Christmas with families paying weekly towards the Christmas club in order to purchase annuals for their children.”

“The area between Osmaston Road and Ascot Drive was known as ‘The Camp’ and consisted of tiny prefabricated dwellings left over, I believe, from a wartime military camp. The residents were amongst the poorest in the town and usually had loads of kids and mongrel dogs. After the Stone family emigrated, a large family who had been living on The Camp moved in. I will call them the Bloggs family and Mrs Bloggs seemed to have a baby every year whilst Mr Bloggs never had (or appeared to want) a job. With the exception of the oldest boy, the remainder were very similar nice looking kids with blond hair and blue eyes. The other was as ginger as you can get and was the cause of speculation among the neighbours. Clearly finances were an issue and when Mrs Bloggs was seen buying food (and cigarettes) from Hodnett’s and paying with a stack of one-shilling coins it was clear that things were so desperate that the electricity meter had been raided.”

“The most feared event of every child in the school was a visit to the Mill Hill Clinic dentist. The initial examination took place in school and gave no clues of the terrors waiting at Mill Hill. Kids needing dental treatment were issued with a card to take – white if you required a filling, green if a tooth needed removing. On entering the waiting room you were greeted by a small line of trembling boys and girls who looked like they had just seen their first ghost. From long and bitter experience the staff had made escape almost impossible so whilst the natural inclination was to run for your life, you had little choice but to sit down. It was then that you would hear screams coming from behind the surgery door accompanied by the low frequency sound of the drills used in those days, and you would immediately adopt the same complexion as the others.”

As 1959 drew to a close, Derbeians looked forward to develop­ments in the townscape. The first tower block of the new Derby and District College of Technology in Kedleston Road had opened, while the town’s major department store, Ranby’s, was preparing to move into new purpose-built premises. The store, which already had premises on Victoria Street, had acquired the 200-year-old Queen’s Head pub next door.