↓ Skip to Main Content
Home › Derby: The Fifties and Sixties

Derby: The Fifties and Sixties 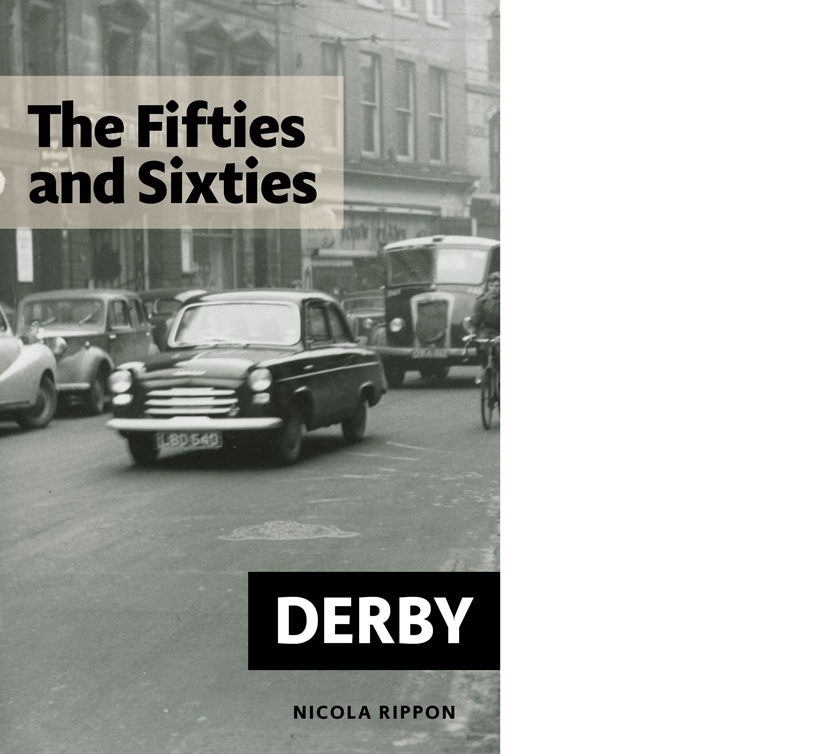 FOR the people of Derby the start of the 1950s brought the first signs that life since the end of the Second World War was beginning to ease. Food and petrol were still rationed and life was still comparatively austere but, little by little, times were changing. By the end of that decade the austere Fifties were no more – the Swinging Sixties were getting under way. Through events great and small – many of them reported in the Derby Evening Telegraph – this fascinating book paints a picture of what it was like to live in the town between 1950 and 1969.

Read about: Curtain down for the Grand Theatre, How Derby celebrated the Coronation, The Carriage and Wagon Works fires, The great Derby earthquake, Derby Playhouse destroyed by fire, Assembly Rooms demolished, St Alkmund’s Churchyard razed to the ground, “More Derby drunks than ever before”, Foul play at the dog track?, A sweltering summer … and the worst of all winters. 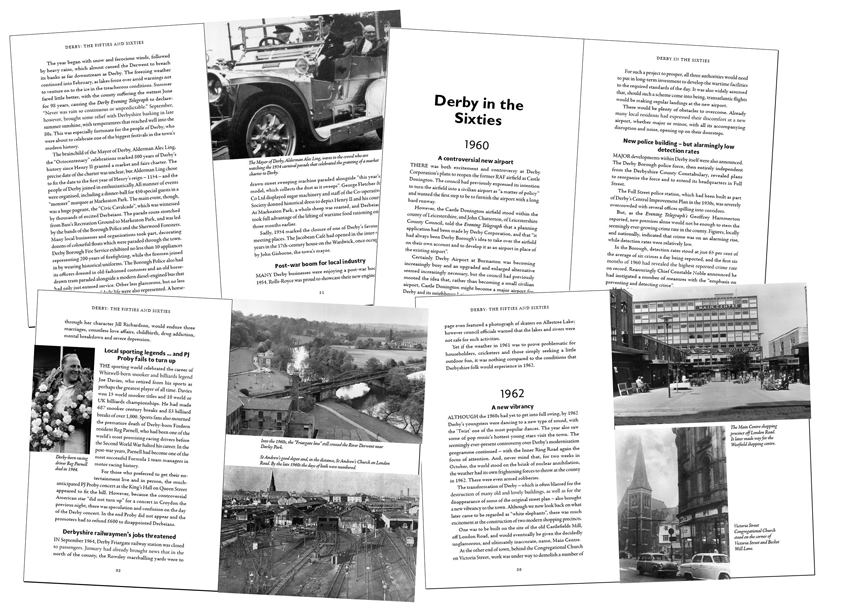 FOR the people of Derby the start of the 1950s brought the first signs that the life they had endured since the end of the Second World War, five years earlier, was beginning to ease. Food and petrol were still rationed and life was still comparatively austere but, little by little, times were changing.
Indeed, by the end of the decade, a new Prime Minister was telling the British that they had “never had it so good”. The country was by then well into a new “Elizabethan Age” and in 1953 Derbeians had celebrated the Coronation as much as anyone. Now they looked forward in anticipation of better days to come.
By 1960 life was very different from that at the end of the war. Food was now plentiful, the old restrictions had been largely forgotten, and there was a new “youth culture”, the like of which had not before been seen. The austere Fifties were no more; the Swinging Sixties would soon be under way.
In Derby there were plenty of changes, not least to the townscape that, by the end of the decade, had lost some of its much-loved buildings. The town that had survived the war was now beginning to look very different.
Through momentous events – the fires and the floods – and through the minutiae of everyday life – this book reminds us of what it was like to live in Derby in the 1950s and the 1960s.

Excerpts:
1951
A shopping centre on Eagle Street?
THE seemingly endless schemes for the redevelopment of Derby might be viewed as a 21st-century trend. But as early as 1951, Derby Borough Council had produced their own 20-year proposal for transforming the town into a modern community. And many of those plans have an astonishingly familiar ring about them today.

The King is dead …
FOR Derbyshire, as for the whole of Britain, 1952 was a year dominated by the death of a much-loved king, and by the accession of his young daughter. Although the nation knew that their monarch was not in good health – he had appeared unwell during the traditional Christmas broadcast only six weeks earlier, and had looked tired and drawn as he waved goodbye to his daughter and her husband when they left London Airport at the start of their long Commonwealth tour just seven days before – the suddenness of his death came as a shock.

Bemrose School’s dramatic talent
DERBYSHIRE also had plenty to boast about in the entertainment industry. Derby-born starlet, Joan Rice, starred in two films: with Burt Lancaster in His Majesty O’Keefe and as Iris in One Good Turn, helping Norman Wisdom to save an orphanage from closure, in one of the funnyman’s finest films.
Meanwhile, another Derby actor, Eric Lander, appeared in a small role in The Colditz Story. At Lander’s former grammar school, Bemrose, headmaster Eric Bennett praised the dramatic talents of another pupil. Michael Knowles, who would go on to star in numerous television sitcoms, most notably It Ain’t ‘Arf Hot Mum! and You Rang, M’Lord? . Knowles had just completed his school career with the lead role in the school’s production of Henry V and had earned rave reviews: “He carried the play on his shoulders … dominating every scene … a fine performance, a fitting climax to a very successful career in school drama,” enthused one critic.

1956
Derby Playhouse destroyed by fire
BRITAIN’S weakening influence in the Middle East, a sudden influx of foreign refugees causing resentment in Derbyshire, the problems of the homeless, and plans for the expansion of the nuclear power industry: sounds familiar? They were all issues capturing headlines in the mid-1950s.
More mundane matters also made big news in the Derby Evening Telegraph. In 1956. On 28 March, the front page of the newspaper featured a picture of actress Ann Kennedy as she examined the charred remains of her professional home – the Derby Playhouse.

1957
Railway works wrecked by fire
A MASSIVE fire at one of the county’s most important and world-acclaimed industrial concerns, a preoccupation with the drudgery of housework, and a determination to give up the unhealthy habit of smoking – they were all issues that concerned the people of Derbyshire in 1957.
On the morning of 10 September, the Evening Telegraph reported in dramatic style: “Night Blaze Wrecks Derby Rail Shop Bays”.

A controversial new airport
THERE was both excitement and controversy at Derby Corporation’s plans to reopen the former RAF airfield at Castle Donington. The council had previously expressed its intention to turn the airfield into a civilian airport as “a matter of policy” and wanted the first step to be to furnish the airport with a long hard runway.

The coldest winter for 168 years
DRAMATIC new changes to the centre of Derby, the possible effects of the Beeching Report, two dramatic fires, and the coldest winter for nearly two centuries – they all served to make 1963 one of Derby’s most memorable years.
The winter of 1963 was reckoned to be the coldest since 1795. Day after day throughout January and February, daytime temperatures barely crept above freezing, with nightfall bringing bitterly cold conditions. Rivers and lakes froze over and there was a constant layer of ice and compacted snow on the ground. Derbeians began to wonder what the town’s pavement’s actually looked like.

1967
The loss of some much-loved landmarks
MANY Derbeians were deeply unhappy that the on-going construction of the Inner Ring Road necessitated the destruction of one of the most beautiful parts of Derby: St Alkmund’s Church and its churchyard, Derby’s only Georgian square.
St Alkmund’s was Derby’s oldest Christian site, predating the town itself. Demolition work revealed several “lost” treasures, like the tombstone of Derby’s most famous artist, Joseph Wright, together with several skulls and hundreds of bones beneath the church floor.