↓ Skip to Main Content
Home › Derby: The Thirties and the War Years

Derby: The Thirties and the War Years 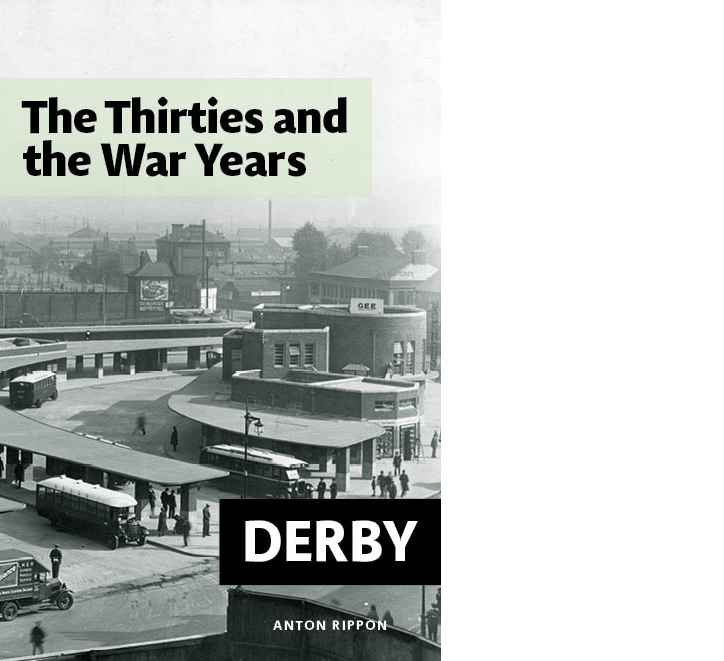 THERE can have been few more significant times for Derby than the 1930s and the war years. Through events great and small, many of them reported in the Derby Evening Telegraph – this fascinating book paints a picture of what it was like to live in the town between 1930 and 1945. There was a never a time like it before, and there has never been a time like it since.

Read about Derby awash in the great flood, Trolley buses instead of trams, The bus conductor who saved an aircraft pilot, Councillors’ “luxuries” called to account, Royal celebrations, The day war broke out, Derby under the Blitz, Wartime Christmas, The Rams at war, Victory celebrations.

THERE can have been few more significant decades for Derby than the 1930s and 1940s. As Britain mainly struggled through the effects of the Great Depression that had started in the United States and – like the bad weather that America so often sends us – had blown across the Atlantic to affect life here in the ’30s, the market and industrial town of Derby suffered less than most.
While elsewhere businesses struggled, Derby bucked the trend and even prospered. As much of the United Kingdom wondered where the next decent meal might come from, Derby rebuilt its town centre. In the 1930s new civic buildings and an imaginatively designed bus station sprang up here. We still enjoy much of it today (although not the bus station, of course).
It could have been different, though. In 1942, Alderman Will Raynes told the Derby Evening Telegraph: “I would like to stand on The Spot and, looking down St Peter’s Street, get a clear and unimpeded view of the beautiful tower of Derby Cathedral.”
He was talking about his plan to demolish the entire town centre and replace it with an industrial area. If Raynes had had his way, almost every building from The Spot to the Cathedral would have been razed to the ground to make way for a 150ft-wide road lined by seven-storey blocks. There would have been elevated roadways along the entire length of Albert Street, over part of Victoria Street and into Green Lane, and over East Street and St Peter’s Churchyard.
Horrible thought, isn’t it? But, at various times in Derby’s modern story, any of these might have come about. Indeed, the idea to flatten the old town centre and replace shops and houses with industrial units had first been floated just after the First World War. Happily, none if it ever came to pass, but the next time we complain about what Derby’s planners have done to our city let us remember – it could have been worse.
Of course, by the time that Alderman Raynes was unveiling his thoughts, Derby was engulfed in another world war. The 1930s, that had proved so positive for the town, had ended in a darkness the like of which the world had never before seen. Derby stepped up magnificently to the challenge of the Second World War. Its men and women gave of their best; its industry was vital to the eventual victory over Nazism.
This book attempts – through events great and small, many of them reported in the Derby Evening Telegraph – to paint a picture of what it was like to live in Derby between 1930 and 1945. There was a never a time like it before, and there has never been a time like it since.

Bad news for Derby’s Hippodrome
IN February 1930, the manager of Derby Hippodrome in Green Lane had some bad news for his patrons. Ernest Vincent normally knew what shows were due to be playing at his theatre up to 12 months ahead. But now the cinema was affecting theatre audiences nationwide.
“I can’t tell you what we are showing even two months ahead,” said Vincent. “The talkies have scared theatre producers,” he explained.

Marks and Spencer – but no airport
IN 1930, the new Marks and Spencer building rose up at the bottom of St Peter’s Street. Designed by Robert Lutyens, the son of Edwin Lutyens who designed the Cenotaph in Whitehall, the M&S Derby store was described as “of the Modern movement with art deco and neo-classical motifs in Portland Stone masonry.”

Derby’s two evening newspapers merge
FRIDAY, 29 January 1932 was an historic day in the life of Derby: the costly newspaper war that had seen readers benefit from all sorts of giveaways – even free insurance – had finally drawn to a close. From the following day, the newspapers would merge. Henceforth, the Derby Daily Telegraph would rule.

Problems caused by cinemas
IN 1933, Derby’s wayward youth would have been less of a problem if cinemas had been allowed to open on Sundays. But better lighting was needed to prevent people from “cuddling and canoodling” at the pictures. That was the view of the chief constable, Colonel Horatio Rawlings, when he addressed a luncheon held in the town by the Derbyshire branch of the National Council of Women. He told them: “I believe I am correct in stating that cinema proprietors in Derby have no desire to open on Sundays. Personally, I think that is a very good thing, although I should not oppose cinemas opening from, say, 8pm to 10pm, so long as the shows were of the right type.

The Jimmy Thomas scandal
ON the political front there was a national sensation that reverberated locally. In 1929, Jimmy Thomas, the former railwayman and trades unionist, had been made an Honorary Freeman of Derby, and in 1935 – in recognition of his 25 years’ service as a Labour MP of the town – he was presented with a gold watch and chain, a Royal Crown Derby dinner service for his wife, and £2,750 which he donated to Derby’s hospitals.

Mining disasters and other fatalities
UNDERLINING Derbyshire’s mining traditions – and the dangers therein – there were several pit disasters this year. In January, at Duckmanton near Chesterfield, nine men were killed in an explosion at Markham Colliery, a mine owned by the Staveley Coal and Iron Company. Seven men lost their lives following an explosion at South Normanton Colliery in February. And nine men were injured, three of them seriously, when there was an explosion at the coke ovens at Grassmoor Colliery in May.

TEARS steaming down the faces of his Sacheveral Street neighbours finally brought home to nine-year-old Derby boy Jim Phelps the reality of war. Until then, war had been a game played with lead soldiers and a toy cannon that fired matchsticks.
But on the morning of Sunday, 3 September 1939, Jim, a pupil at Traffic Street School, saw his mother’s friends hugging and weeping. For the second time in a generation, Britain had declared war on Germany. In that moment he did a lot of growing up.
Along with the rest of the free world, Jim’s hometown was destined for six years of struggle and heartbreak. Grief would touch most of its homes. There would be rationing and shortages, rumours and scares, agony and despair. Yet there would also be laughter and hope. The people of Derby who were to live through that tapestry of every human emotion starkly symbolised in the years 1939-45, would eventually agree that it was a very special time. There would be a comradeship impossible to recapture in peacetime.

There were plans to build a 600-bed emergency hospital on land adjoining the City Hospital, and on 1 June soldiers helped firemen fight a blaze which partially destroyed a stand at Derby Racecourse. Bizarrely, Brussel sprouts were growing in the flowerbeds at the Arboretum.
In August, 100 German and Austrian women, some of the nuns, were arrested and brought to Derby to board a train which would take to them on the first part of their journey to internment on the Isle of Man. Concrete tank barriers and pill boxes – many of them still evident in the countryside around Derby today – were erected, and in the Doveridge area, locals discovered German parachute harnesses. They turned out to be an attempt by the Nazis to create local panic.
On Thursday, 8 August 1940, the people of Derby awoke to learn that they had special visitors: the King and Queen were coming to town.

In July 1942, a former Rams player, Arthur “Rasher” Bacon, was one of more than 20 fatalities when a lone Dornier attacked the Rolls-Royce works at Nightingale Road. He was on duty as a special policeman.
In January 1941, the Baseball Ground itself had been a casualty with the Osmaston Stand badly damaged by German bombs.
In 1942-43, the Rams joined the Football League North and competitive football returned. With team selection a lottery, however, there were some bizarre results. Derby opened with a 6-1 win at Notts County, lost 8-1 at Wolves in November, and two months later beat Mansfield Town 10-0.

The Day They Bombed Rolls-Royce
IT is the greatest myth of Derby in the Second World War – the day they bombed Rolls-Royce. The story goes something like this: a daring lone Dornier 217, piloted by a former Rolls-Royce worker, attacks the R-R works at low-level, drops some bombs, machine-guns workers who are changing shifts, and then goes on a shooting spree around the town before heading for the coast, where it is shot down over the North Sea.
Rolls-Royce was indeed hit during the war – and by a low-flying Dornier 217 – but the rest is folklore, embellished over decades by locals confused by several issues on that chaotic morning over 70 years ago.