The Day That Derby Won The Cup

ON 27 April 1946, Derby County won the FA Cup. It was the first Cup Final since the end of the Second World War, the Rams’ first appearance at the Empire Stadium, and the first time in their 62-year history that they had lifted the trophy.

Through interviews with the Cup-winning team, the newspapers of the day, including match reports on every cup-tie on the road to Wembley, and fascinating photographs, The Day That Derby Won The Cup tells the dramatic story of that epic season. Read about

The Day That Derby Won The Cup is a must for every Rams fan who treasures their club’s history and this unique moment in it. 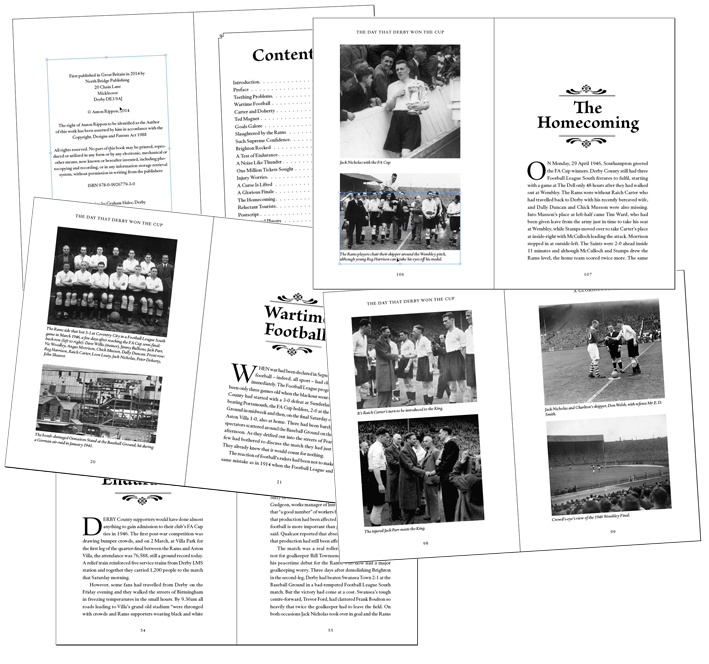 In the Market Place, thousands danced to the accompaniment of the Rolls-Royce Band, which competed with several impromptu “orchestras” around the square. At midnight, a huge crowd sang Abide With Me before falling into a two-minute silence to remember the dead. Six long, war weary years were finally over. Now the nation could attempt to rebuild their lives and to return to normality, whatever that was.

“It’s A Nightmare For Soccer Managers”, the Daily Mail reported: “There has been a lot of head scratching by harassed football club managers over the heavy League programme … Almost every manager has a story to tell of borrowing and making-do …. They have had to beg to secure the release of their men in the forces … Then there is the travel problem. The luxury motor coaches in which teams travelled the country in 1939 have gone; trains are fewer. It is a good thing that there is no trip like the 480 miles Derby County had to cover last week to play Plymouth … 480 miles these days, when it is impossible to reserve train accommodation, and even the corridors are packed, is no joke for any team.”

Towards the end of the 1943-44 season Derby County had a new full-time manager. It was their first such appointment since George Jobey had arrived at the Baseball Ground in the summer of 1925. When the Rams had re-formed, Jobey was not in a position to pick up the reins again. At the Midland Hotel, Derby, in 1941, a joint FA-Football League commission had found him and several directors guilty of paying illegal wages and bonuses to Rams players throughout the 1930s. Jobey’s punishment was a sine die suspension from all football. This was lifted in 1945, but by then the Rams were on their way to winning the FA Cup. And it was Ted Magner who set them on the road to Wembley.

Although before setting off for Birmingham many supporters had taken the trouble to vote in the first Derbyshire County Council elections to be held since 1937, many more had taken what the Evening Telegraph described as “French leave”. Ley’s had given workers permission to be absent on Saturday morning, but a machine moulder at an Ilkeston foundry was suspended for taking time off to watch the match. Sixty of his colleagues came out on strike.

Sixty-five thousand fans had watched the Hillsborough game. It was a huge attendance, but it would be eclipsed by the replay, four days later. When young wing-half Jim Bullions sat nervously in the Maine Road dressing room, minutes before the semi-final replay was due to get under way, he thought he could hear thunder. The noise started as a low rumble, and slowly built up into a crescendo.

The same day as the announcement, the Evening Telegraph reported that Cornish new potatoes were now available in Derby – at ten shillings per pound – and English asparagus was for sale at £1 5s 0d per bunch. The average weekly in Britain was just over £7. No wonder many people had been angered by plans for a civic meal for some footballers.

But would Derby soon have the FA Cup? First there was a threatened players’ strike to overcome. The Derby players were furious that their wives had been given cheaper stand tickets than those allocated to directors’ wives. Led by senior players, Doherty, Carter and Nicholas, they told the club chairman, Ben Robshaw: “No decent tickets, no game.” Until the day he died, Carter was adamant that the 1946 FA Cup final would not have gone ahead if the Derby directors had not relented: “It was an insult, the directors’ wives sitting under cover right near the Royal Box and our wives out in the open.”