↓ Skip to Main Content
Home › When The Rams Met The Nazis

When The Rams Met The Nazis 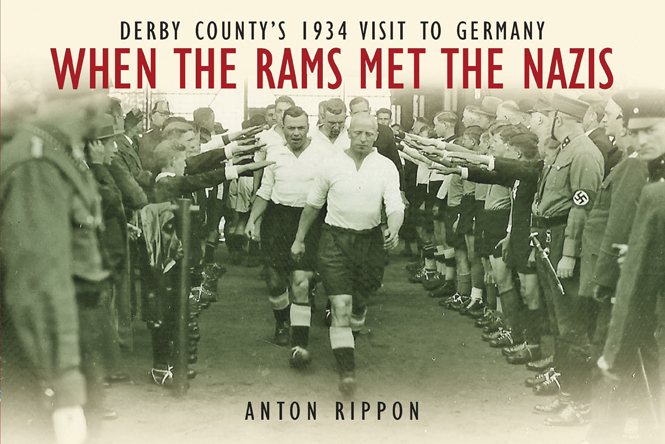 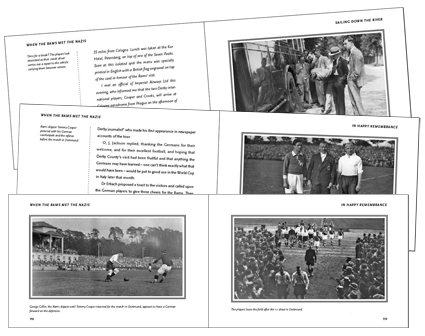 IN May 1934, Derby County, one of England’s leading clubs, was invited to make a close-season visit to Germany. They found a country swathed in the swastika. Adolf Hitler had gained power only 12 months earlier, and even football could not escape the Nazi thrall. The Derby players were also surprised by the strength of their opposition as the Germans used the Rams’ visit to prepare for the World Cup to be held in Italy later that month. When The Rams Met The Nazis tells the story of that trip, using contemporary reports and photographs many of which have not been published before. The result is a fascinating glimpse into the experience of English footballers stepping into a country undergoing the massive political and social upheaval that would ultimately lead to the Second World War.

It was no surprise, then, that in the spring of 1934 there came an offer from the German Football Association to visit that country when the English season was over. The Rams accepted at once, but then on 1 May they sent a telegram to the Germans informing them that England’s Tommy Cooper and Sammy Crooks were required for international duty in Hungary and Czechoslovakia, and that Scotland’s Dally Duncan would not be able to make the trip either.

At their hotel, the Rams party then discovered that two of their number – trainer Dave Willis and defender Jack Nicholas – were missing. Eventually, they were found, still at the railway station, wrestling with porters over the huge wicker basket that contained the Rams’ kit, training equipment and footballs.

“We were still sweltering in the abnormal heat, and matters were made more uncomfortable with a tedious four-hour train journey in a baking continental train. All the players were greatly impressed by the beauties of the Rhine Valley. Part of the journey from Frankfurt travels for a distance of some 40 miles alongside the famous river with its high vine-covered banks. On arrival in Cologne we were greeted with terrific roars of thunder accompanied by hailstones.”

On Sunday, 13 May 1934, Derby County had a further taste of the might that German football could offer. Before 25,000 spectators in the Cologne Stadium – as the RheinEnergieStadion, the rebuilt ground would be a venue in the 2006 World Cup finals – the Rams went down heavily to the latest version of a German FA XI.

“The entire stadium was swarming with armed guards, all wearing swastikas. We knew we’d be expected to give the Nazi salute before the kick-off, but when the time came we just stood to attention. Afterwards we were treated with enormous kindness, though, and the Germans just seemed to want to send us away with a favourable impression of their country. But you couldn’t fail to see the military preparations everywhere. The whole country seemed to be one huge armed camp.”